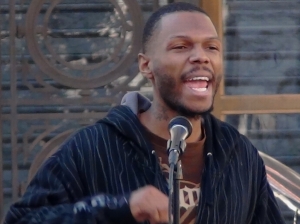 Malcolm Shabazz, the grandson of civil rights icon Malcolm X, has been killed in Mexico according to The Amsterdam News. He was 28.

Shabazz’s death was also confirmed on Twitter and Facebook by Terrie Williams, a friend of the Shabazz family.

Talking Points Memo reported that Shabazz died of injuries sustained during a robbery.

“He was murdered. He was in Mexico City and I believe they attempted to rob him and he didn’t allow it, so they beat him to death and he died on his way to the hospital,” Juan Ruiz, a member of the California-based labor organization Rumec, told TPM. “This is all I can confirm, everything else is under investigation for the meantime.”

An observer to the world. I have a unique view of the world and want to share it. It's all in love from the people of the "blues". Love, Knowledge, and Sharing amongst all is the first steps towards solving all the problems amongst humanity.
View all posts by The Soul Brother →
This entry was posted in News from the Soul Brother and tagged Betty Shabazz, Malcolm Shabazz, Malcolm X, Mexico, New York Amsterdam News, twitter. Bookmark the permalink.