***Update: Please take the survey “Is good citizenship an effective guard against being profiled?”. It only takes a minute and the information is confidential. Here’s the link to the survey https://www.surveymonkey.com/s/VG8YRTV  ~ SB. Thanks!!*** 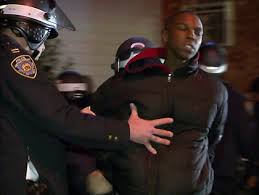 Don’t panic. If you are like me, you have probably not run across the word immiserate. And until I began online reading of Johnathon Kozol’s 2012 novel, Fire in the Ashes: Twenty-Five Years among the Poorest Children in America, I probably would have missed the occasion to look it up. Webster’s definition of immiserate implies causation, to cause impoverishment and severe hardship and misery. Economics, the production, distribution and consumption of goods and services, plays an essential role in the political actions causative of impoverishment among populations of humans. Fire in the Ashes concerns such a population, a Manhattan neighborhood of American children and their families living in “third world” settings located less than five (5) blocks from Fifth Avenue. Some years before, I also read a 1991 novel by Alex Kotlowitz about the lives of children in cities like Chicago, Baltimore, and Washington DC, urban places where young children yet speak in “If” language. “If I grow up, I’d like to be a bus driver…

Immiseration terminology quickly draws attention to the “misery” core of the word—an immediate connection between immiseration and Victor Hugo’s fictional tales of Les Misérables, the dramatic story of 19th century France in rebellion, featuring the peasant ex-convict, Jean Valjean, imprisoned for stealing a loaf of bread to feed his sister’s starving children. At the end of his prison service for bread-theft, Valjean was consigned to perpetual carrying of le ticket jaune, the yellow passport that forever branded him as a criminal. Today, four million USA ex-felons are denied the right to vote.

Translated, les misérables means the miserable ones, the wretched, the poor, the victims—so that the English transitive verb immiserate closely resembles the spelling of the English adjective miserable. Les Misérables then, speaks to the moral philosophy of 19th century France, the rise of antimonarchism and the moral voice role of religion, justice for the poor and the love of family existing among the poor. US Census 2007-2011 reports indicate 42.7 million (14.3 %) as the number of Americans living below the poverty line; 27.0 % of Native Americans and 25.8% of African-Americans. “If I grow up…” Eleven year old Lafeyette (his name spelled with an ‘e’), powerfully summarizes the soulful hazards that many school children continue to face today—life-threatening accidents and televised incidents commonplace in 21st century American society—Lafeyette’s “If” language echoing the immiseration plight of early 19th century French children and their families.

Deliberative impoverishment rests among the backdrops of the 2013 Bishop’s Task Force racial profiling research. Will such language show up in the stories told by respondents to the Bishop’s survey? Similar to the novel, There are No Children Here, one purpose of the “Tell Us Your Story” section of the survey is to humanize the victims, spotlight immiseration patterns and practices, and expose the racially disparate treatment that propels the continued existence of profiling.

An observer to the world. I have a unique view of the world and want to share it. It's all in love from the people of the "blues". Love, Knowledge, and Sharing amongst all is the first steps towards solving all the problems amongst humanity.
View all posts by The Soul Brother →
This entry was posted in News from the Soul Brother and tagged Alex Kotlowitz, Fifth Avenue, France, Jean Valjean, Les Misérable, politics, poverty, race, racial equity, United States, Victor Hugo. Bookmark the permalink.