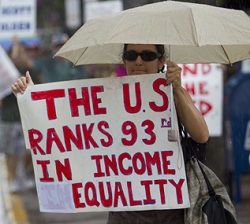 By Mike DeBonis and Reid Wilson

States and municipalities across the country are leading a localized push to raise the minimum wage, driven largely by Democrats, who see an opening to appeal to working-class Americans at a time of growing inequity.

Efforts in Congress to raise the national minimum wage above $7.25 an hour have stalled. But numerous local governments — including those of Montgomery and Prince George’s counties, and the District — are forging ahead, in some cases voting to dramatically increase the pay of low-wage workers.

The efforts, while supported by many unions, threaten to create a patchwork of wage rates that could mean workers in some areas will be entitled to vastly less than those working similar jobs nearby. The campaigns reach from coast to coast.

“Congress can’t do anything right now, and even if they could, they wouldn’t even come close to the level that various cities and states around the country are looking at,” said Phil Mendelson, the Democratic chairman of the D.C. Council, which is expected to take an initial vote Tuesday setting the city’s minimum wage at $11.50 an hour by 2016.

The county councils in Montgomery and Prince George’s voted this week to reach $11.50 — higher than any rate in effect in the United States — by 2017. The coordinated effort emerged in recent months after local officials decided they could not wait for Congress or state legislators.

As minimum wage fights have gone increasingly local, Democrats have led the charge, working to define themselves as the party of blue-collar workers while casting Republicans as defenders of corporations and big business.

“When the pope starts criticizing trickle-down economics, you know the gulf between rich and poor has become too much to ignore,” said Tom Lindenfeld, a Democratic consultant with close ties to labor unions.

An observer to the world. I have a unique view of the world and want to share it. It's all in love from the people of the "blues". Love, Knowledge, and Sharing amongst all is the first steps towards solving all the problems amongst humanity.
View all posts by The Soul Brother →
This entry was posted in News from the Soul Brother and tagged Council of the District of Columbia, Democratic, income inequality, Living wage, minimum wage, United States, working wage. Bookmark the permalink.