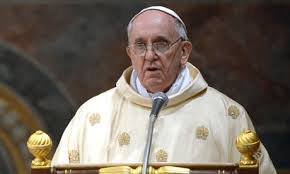 Progressives across the U.S. applauded Pope Francis’ first major written statement of his papacy, Evangelii Gaudium (The Joy of the Gospel), for denouncing trickle-down economics, runaway inequality, and the idolatry of money while devoting comparatively little space to the Church’s retrograde attitudes on women and staunch opposition to abortion.

As usual with Church teachings, it is very hard to fit the full range of Catholic thought into secular ideological boxes, particularly in the United States. For every papal pronouncement like “Just as the commandment ‘Thou shalt not kill’ sets a clear limit in order to safeguard the value of human life, today we also have to say ‘thou shalt not’ to an economy of exclusion and inequality,” there’s a deeply conservative social counterpart (e.g., “It is not ‘progressive’ to try to resolve problems by eliminating a human life”).

Apostolic exhortations like Evangelii Gaudium are basically calls to carry out existing Church teachings, so in many ways there’s nothing unique about the sentiments expressed in the document. The frontal assault on neo-liberal economic dogma and call for people to get out in the streets to evangelize the more communal and harmonious message of the Church will certainly spark a lot of discussion. But what really matters now is what progressives, Catholic and non-Catholic alike, plan to do with Francis’s exhortations. How do we ensure that the Pope’s shift in focus to inequality and the well-being of the poor becomes a focus of actual politics and not just a bunch of nice words that make us feel like our philosophical principles got a nod from the Big Guy?

One of the key moves in turning any important book, speech, or treatise into concrete political accomplishments is refining its principles into a core agenda and value system that people can educate and organize around. Luckily, Evangelii Gaudium is quite amenable to this treatment.

First, let’s talk about the Catholic concept of a “just wage.” The exhortation expresses important ideas about the dehumanizing nature of the modern economy and the social exclusion implicit in global capitalism. It also explicitly argues social welfare programs are not enough on their own and that we should reach higher for a “just wage,” a longstanding idea in American Catholic social thought dating back to the Progressive and New Deal eras. For Pope Francis, this means all people should “have adequate access to all the other goods which are destined for our common use” — expanding the notion of a “wage” well beyond simple renumeration. It’s a demand for both the government and corporations take seriously duties to provide “education, access to health care, and above all employment” to, respectively, citizens and employees.

Read More How To Use The Pope’s Agenda To Make The World More Equal | ThinkProgress.

An observer to the world. I have a unique view of the world and want to share it. It's all in love from the people of the "blues". Love, Knowledge, and Sharing amongst all is the first steps towards solving all the problems amongst humanity.
View all posts by The Soul Brother →
This entry was posted in News from the Soul Brother and tagged Catholic Church, commentary, Evangelii Gaudium, Pope Francis, United States. Bookmark the permalink.