The True Cost of a Higher Minimum Wage 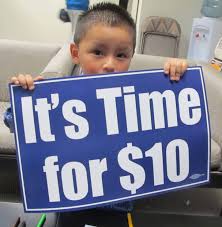 In his speech at the Center for American Progress this week, President Obama devoted considerable time to an issue suddenly much in discussion: the minimum wage. This is not a new debate. In fact, it neatly echoes the last time Congress raised the minimum wage, in 2007, which echoed the debates before that. Few economic issues are such sweet catnip to ideological camps, and there is precisely zero consensus about whether these minimums have positive, negative or no effect.

Supporters say that a higher minimum wage will give people a better standard of living and boost consumption. Detractors argue that it will lead companies to hire fewer workers and kill job creation. One thing no one addresses, however, is that regardless of whether the government raises the minimum wage, our society can’t endlessly coast with a system that includes wage stagnation for the many and soaring prosperity for the few, nor can the government snap its legislative fingers and magically produce income. Someone will pay for these increases; nothing is free.

You wouldn’t know that from the tenor of the debate. In Obama’s speech, he stated that, “it’s well past the time to raise a minimum wage that in real terms right now is below where it was when Harry Truman was in office.” He acknowledged that many resist the idea of mandating a wage above the current $7.25 an hour. “We all know the arguments that have been used against a higher minimum wage. Some say it actually hurts low-wage workers — businesses will be less likely to hire them. But there’s no solid evidence that a higher minimum wage costs jobs, and research shows it raises incomes for low-wage workers and boosts short-term economic growth.”

It was a robust, populist speech, and it triggered an inevitable retaliation on the right. “Mr. Obama wants to raise the minimum wage to please his union backers,” harrumphed a Wall Street Journal commentator. Jennifer Rubin of the Washington Post decried the idea as just more government wealth transfer, and she countered that rather than raising wages, “One way to lessen income inequality would be to stop transferring wealth from young to old.”

An observer to the world. I have a unique view of the world and want to share it. It's all in love from the people of the "blues". Love, Knowledge, and Sharing amongst all is the first steps towards solving all the problems amongst humanity.
View all posts by The Soul Brother →
This entry was posted in News from the Soul Brother and tagged Barack Obama, Harry Truman, income inequality, minimum wage, money, United States, Wage, Wall Street Journal. Bookmark the permalink.

1 Response to The True Cost of a Higher Minimum Wage