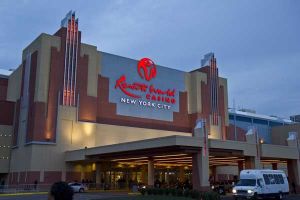 For the fast-food workers who demonstrated across the country this month, it is only a dream. For many economists and policy makers, it is the subject of intense debate. But there is nothing hypothetical about the living wage for Sandra Charles, a security officer and single mother. For her, it is real, tangible and gloriously life-changing.

In October, Ms. Charles and 1,374 of her colleagues at the Resorts World Casino in Queens took an unexpected leap toward the middle class when a labor arbitrator ordered the casino management to pay them a living wage, issuing a ruling that doubled their average paychecks.

Overnight, the average annual salaries of the cooks, parking attendants, slot machine workers, security guards and other low-wage staff members shot up from about $20,000 to nearly $40,000. By 2016, according to the new three-year contract signed by the casino management and the workers’ union, most employees at Resorts World will earn $60,000 a year.

You heard that right: Sixty thousand dollars a year.

In a city that boasts of its appeal to billionaires, this might not sound like much. But for the hundreds of casino workers, many of whom had relied on food stamps and second and third jobs to get by, it is nothing short of staggering. Ms. Charles still weeps when she describes how her life has changed. For her, this is a season of miracles.

“This gives us a breakthrough that no one ever dreamt of,” said Ms. Charles, 47, who no longer spends sleepless nights worrying about paying rent.

Her oldest daughter, who had dropped out of college to work, plans to enroll in classes come January. Her youngest daughter, whose prescription for eyeglasses expired nine months ago, has a brand new pair.

In the spring, Ms. Charles plans to move with her girls into a two-bedroom apartment. For the first time, she says, she will sleep in her own bedroom, not on the couch. “I can pay my bills,” she marveled. “I can save. I can take care of my kids.”

An observer to the world. I have a unique view of the world and want to share it. It's all in love from the people of the "blues". Love, Knowledge, and Sharing amongst all is the first steps towards solving all the problems amongst humanity.
View all posts by The Soul Brother →
This entry was posted in News from the Soul Brother and tagged Casino, fast food, Living wage, New York, New York City, Resorts World, Security guard, Single-parent, Wage. Bookmark the permalink.