Senate Votes To Move Ahead On Extending Unemployment Benefits 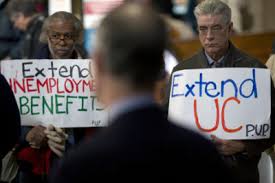 A three-month extension of federal unemployment benefits for 1.3 million jobless Americans won a key procedural vote in the Senate on Tuesday.

The 60-37 vote indicates there’s enough Republican support to move the Emergency Unemployment Compensation, which expired on Dec. 28, forward to a full vote. As The Associated Press writes, the measure “is the leading edge of a Democratic program that also includes raising the minimum wage and closing tax loopholes on the wealthy and corporations.”

The vote does not guarantee final passage in the Senate and the measure still must clear the Republican-controlled House.

As NPR’s Craig Windham reported, GOP lawmakers opposed the bill because it does not include spending cuts to pay the cost of the extension.

The vote was originally scheduled for Monday evening, but it was abruptly delayed because, as Politico reports, supporters did not have the votes they needed.

On Monday, Politico wrote that Democrats needed five Republicans to join them to reach the needed 60-vote threshold, and at that time just two Republicans were in their column.

Speaking in the chamber just before the vote, Senate Minority Leader Mitch McConnell lashed out at the Democrats and President Obama:

An observer to the world. I have a unique view of the world and want to share it. It's all in love from the people of the "blues". Love, Knowledge, and Sharing amongst all is the first steps towards solving all the problems amongst humanity.
View all posts by The Soul Brother →
This entry was posted in News from the Soul Brother and tagged 99ers, money, Obama, politics, unemployment, unemployment benefits, United States, video. Bookmark the permalink.