The Color of David: Raising Brown Kids in America 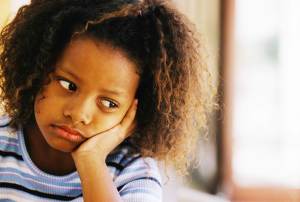 I zoomed around the bend with our double stroller, excited to show my girls, three and one, the Baby Jesus sleeping in his manger, surrounded by Mary, Joseph and the wise men on Alhambra Circle in Coral Gables, Miami. I should have expected it, but was nonetheless surprised to find a blonde, blue-eyed Christ child lying in the straw. Even here in Miami, which is 61.3 percent Latino, the Christ child apparently doesn’t have so much as brown hair, much less brown skin. Rather than stop the stroller, I kept zooming around the corner, crying out evasively, “It’s the Baby Jesus,” when my half-Ghanaian 3-year-old Bianca asked, “Who’s that?” I added, “But they made a mistake giving him blonde hair and white skin. He was brown!” Apparently, even Christmas is fraught with racial land mines. Witness Megyn Kelly’s recent white Jesus/white Santa comments. We all know Jesus hailed from Palestine and I recently learned that the original Saint Nicholas hailed from modern-day Turkey. Our culture literally whitewashes history, its heroines and heroes. For example, did you know the man on whom the Lone Ranger was based was actually African-American?

My observant 3-year-old points out discrepancies where I haven’t seen them before:

“What do you mean the black Olivia? They’re both pigs.”

“But the bad Olivia is black.”

“What do you… [on closer examination] You know, what, Bianca? You’re right. The bad Olivia has darker skin. They made a mistake writing this book.”

How do you protect your beautiful little girls against the world’s “mistake” of always representing blond-haired, blue-eyed boys and girls as the pinnacle of beauty, while barely or poorly representing all other children in a hierarchy directly proportional to the shade of their skin? Not only are black boys not considered by the mainstream to be “beautiful,” they are not, as cases like those of Trayvon Martin and Oscar Grant exemplify, even considered worthy to live. And black children who go missing fall victim a second time, to the “missing white girl syndrome.” According to Missing Children in National News Coverage: Racial and Gender Representations of Missing Children Cases by Seong-Jae Min and John Feaster of Ohio State University, the news media reports white children missing with a 13.7 percent greater frequency than the FBI reports their being taken. The news media reports black children missing with 13.7 percent lower frequency than does the FBI. And cases of non-African-American girls who are kidnapped are more than twice as likely to be reported on the news than the cases of kidnapped African-American girls, halving the black girls’ chances of being found.

An observer to the world. I have a unique view of the world and want to share it. It's all in love from the people of the "blues". Love, Knowledge, and Sharing amongst all is the first steps towards solving all the problems amongst humanity.
View all posts by The Soul Brother →
This entry was posted in News from the Soul Brother and tagged biracial, children, motherhood, parenting, parents, race. Bookmark the permalink.