How I lost my middle-class life 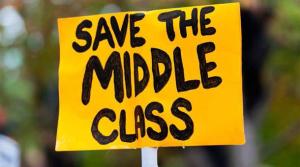 Recently I read an article in the New York Times Magazine by Dominique Browning, the former House and Garden magazine editor who lost her job when the magazine folded in 2007. Like “The Bag Lady Papers,” a recent memoir by Madoff victim Alexandra Penney forced to “scale back dramatically” by, among other things, cutting her maid’s hours, it was one of those “how I lost everything and discovered what’s really important in life” stories the media is so fond of these days. Browning writes vividly of the dislocation and loss unemployment brings, about her grief at selling her “forever” house. But her despair has a silver lining: She took her retirement income and moved to a second house in a coastal Rhode Island town, where she found peace communing with nature, playing Bach on the piano, and enjoying a slower pace of life. By losing everything, she gained happiness.

This is not one of those stories.

I’m an older single mother with four children under the age of 12, two dogs and a cat, and since September 2009 we have lived in a 26-foot travel trailer in Southern California. Our story is very different from those of Penney and Browning, but we’re not all that different from thousands of Americans who don’t have wealthy and influential friends, robust retirement accounts or second homes to which we can retreat when the bottom falls out of our lives. Our story doesn’t have a silver lining.

Two years ago my children and I were living in a nice five-bedroom house in Colorado, and the decline of the housing market was just an abstract worry. I had plopped down almost all of my life’s savings (including cashed-out retirement funds) on the down payment for our house to keep monthly payments low. I was employed in the environmental-permitting field and able to pay the mortgage. My worry was more personal: My young son was not growing. Adopted at age 3 with a successfully repaired heart defect, he had weighed 28 pounds for the nearly two years we had lived in Colorado. After what seemed like endless tests and failed fixes, we learned his lungs had suffered permanent damage in the 18 months before his heart was repaired.

“If he were my son,” the doctor said, “I’d move to a lower elevation.”

Read More How I lost my middle-class life – Salon.com.

An observer to the world. I have a unique view of the world and want to share it. It's all in love from the people of the "blues". Love, Knowledge, and Sharing amongst all is the first steps towards solving all the problems amongst humanity.
View all posts by The Soul Brother →
This entry was posted in News from the Soul Brother and tagged economy, Great Recession, life, middle class, money, motherhood, Mothers, recession, United States. Bookmark the permalink.