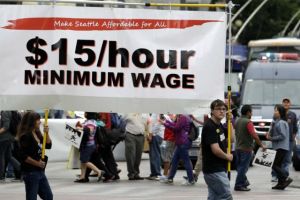 Retail powerhouse Walmart prides itself on providing customers with “everyday low prices.” But labor experts believe the retail giant scored itself a public relations bargain with a much-publicized but less-than-generous pay increase for some of its workers.

For more than half a century, Walmart has paid its 2 million-plus employees such depressed wages that many full-time workers cannot live on them. So many full-time employees are on state and federal welfare programs.

That’s how Walmart ended up becoming the single largest private-sector beneficiary of public assistance. U.S. taxpayers, according to Barry Ritzholtz of Rithholz Wealth Management, “have been subsidizing the wages of this publicly traded, private-sector company to the tune of $2.66 billion in government largesse a year.”

The world’s largest company by revenue has long pushed back against every labor pressure to increase wages, hours, and benefits. So why is Walmart really raising wages for half a million of its associates?

Walmart has seen a 44% annual turnover rate among its hourly employees—a marked difference from the 6% turnover rate at rival Costco. That’s because Costco pays workers an average of $20.89 an hour, while Walmart pays $12.85.

This practice may cost more than it saves. The Harvard Business Review estimates that for “skilled and semi-skilled jobs, the fully loaded cost of replacing a worker who leaves (excluding lost productivity) is typically 1.5 to 2.5 times the worker’s annual salary.”

Joel Naroff, chief economist at Naroff Economic Advisors, believes that “Wal-Mart’s move to raise their employee pay base is a sign that the labor market has already tightened.” Moreover, Walmart may just be trying to stop its workforce from leaving for better opportunitiesas the economy improves.

via The Real Reason Walmart U-Turned on Wages | Alternet.

An observer to the world. I have a unique view of the world and want to share it. It's all in love from the people of the "blues". Love, Knowledge, and Sharing amongst all is the first steps towards solving all the problems amongst humanity.
View all posts by The Soul Brother →
This entry was posted in News from the Soul Brother and tagged business, income inequality, minimum wage, money, organized labor, politics, United States, Walmart. Bookmark the permalink.