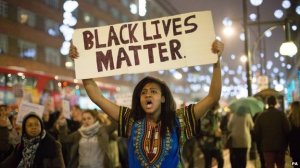 Obvious as that should be, it’s needed saying. And saying it and hearing it said has been cathartic. Because too often, the choices Americans have made — and those of the leaders they elect and the police chiefs those leaders appoint — say otherwise. When you force Americans, especially white ones, to choose between safety and fairness, safety wins.

As potent as the Black Lives Matter movement has been in driving the media conversation, preaching to and amplifying the voices of the converted, it’s done little to convince Americans not already on board of the need for change.

That’s a false choice. But if the goal is to make change, not just point to how much change is needed, those numbers still need to be reckoned with.

More from Rasmussen: 61% of Americans say the media overhypes incidents in which black people are shot by white police officers, and 63% say that coverage makes things more dangerous for cops.Also: 78% of whites say inner-city crime is a bigger problem than police discrimination against minorities, while 56% of blacks say discrimination. And 82% of black voters think black Americans receive unfair treatment from police . Just 30% of whites see it that way.

An observer to the world. I have a unique view of the world and want to share it. It's all in love from the people of the "blues". Love, Knowledge, and Sharing amongst all is the first steps towards solving all the problems amongst humanity.
View all posts by The Soul Brother →
This entry was posted in News from the Soul Brother and tagged african american, Barack Obama, black, Black Lives Matter, commentary, Ferguson, law, politics, race relations, Rasmussen poll, United States. Bookmark the permalink.