Fleece Force: How Police And Courts Around Ferguson Bully Residents And Collect Millions 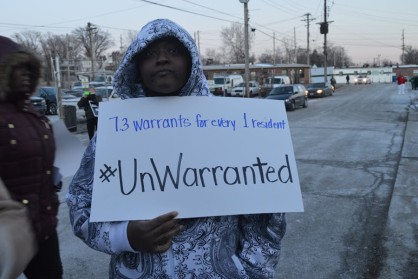 “Lacee Scott?” the judge called. The 23-year-old rose from a hard black plastic chair, walked past the fireplace and stood before the table at the front of the living room.

From the outside, the house is barely distinguishable from others on the street — brick, three bedrooms, built in 1948. Over the entrance, however, there is a sign identifying it as City Hall. Once a month, the living room, with its lamps, hardwood floors and clock on the mantle, becomes a courtroom. Those with business before the judge first check in with the clerk in the dining room before taking a seat among the rows of chairs set up in the family room.

Scott, a senior at Alabama A&M University, had lived in Pasadena Hills during high school. Her father, a former St. Louis County police officer, works for Walgreens. Her mother is the principal of a local elementary school. Last summer, when Scott was home visiting her family, a notice was placed on her car.

Parking had never been an issue in her quiet, suburban community. Pasadena Hills is small, with a population of less than 1,000. But the municipality had recently passed an ordinance requiring those parking overnight to display a $10 residential parking sticker on their vehicles. The notice ordered Scott to come to City Hall to obtain the sticker.

The city office has extemely limited business hours, however. The seven-hour drive from Huntsville, Alabama, back to Pasadena Hills also made it difficult for Scott to appear in person. Soon, the city began mailing her threatening letters.

“They sent me a letter and said there would be a warrant out for my arrest if I didn’t come back for this,” Scott told The Huffington Post of her court appearance. “For $10. For parking in front of my house.”

Such experiences are not uncommon in St. Louis County. According to a scathing report from the U.S. Department of Justice released this month, authorities in nearby Ferguson routinely abused the rights of residents, who were viewed “less as constituents to be protected than as potential offenders and sources of revenue.” Attorney General Eric Holder said the Ferguson Police Department had essentially served as a “collection agency,” with officers competing to see who could issue the largest number of citations.

An observer to the world. I have a unique view of the world and want to share it. It's all in love from the people of the "blues". Love, Knowledge, and Sharing amongst all is the first steps towards solving all the problems amongst humanity.
View all posts by The Soul Brother →
This entry was posted in News from the Soul Brother and tagged civil rights, Eric Holder, Ferguson, law, Missouri, Municipal Courts, police, race, racist, St. Louis County, U.S. Department of Justice. Bookmark the permalink.

1 Response to Fleece Force: How Police And Courts Around Ferguson Bully Residents And Collect Millions