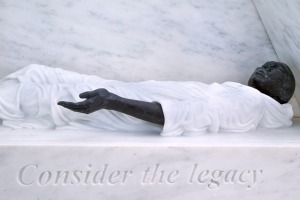 United Nations officials today welcomed the unveiling at the world body’s New York Headquarters of a permanent memorial to the victims of slavery and the transatlantic slave trade which they acknowledged was one of the most horrific tragedies of modern history.

“This memorial stands as a strong and permanent reminder – not only of this gross injustice but of the goals that the UN set for itself 70 years ago,” Secretary-General Ban Ki-moon said at the unveiling. “This poignant and powerful memorial helps us to acknowledge the collective tragedy that befell millions of people. It encourages us to consider the historical legacy of slavery and, above all, it ensures that we never forget.”

He pointed to the UN’s educational work, teaching students about the transatlantic slave trade through the ‘

’ and ensuring they appreciate how intolerance and racism can easily breed acts of hatred and violence.

“I hope descendants of the Transatlantic Slave Trade will feel empowered as they remember those who overcame this brutal system and passed their rich cultural heritage from Africa on to their children,” Mr. Ban said, while also issuing a call to honour women of African descent, noting that a third of those sold as slaves from Africa were female.

An observer to the world. I have a unique view of the world and want to share it. It's all in love from the people of the "blues". Love, Knowledge, and Sharing amongst all is the first steps towards solving all the problems amongst humanity.
View all posts by The Soul Brother →
This entry was posted in News from the Soul Brother and tagged Africa, african american, Ban Ki-moon, black, New York, race, Remember Slavery Programme, slavery, Transatlantic Slave Trade, United Nations, United States. Bookmark the permalink.