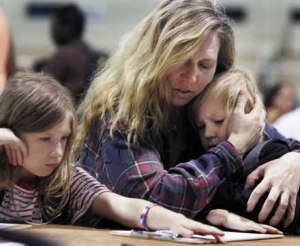 America’s wealth grew by 60 percent in the past six years, by over $30 trillion. In approximately the same time, the number of homeless children has also grown by 60 percent.

Financier and CEO Peter Schiff said, “People don’t go hungry in a capitalist economy.” The 16 million kids on food stamps know what it’s like to go hungry. Perhaps, some in Congress would say, those children should be working. “There is no such thing as a free lunch,” insisted Georgia Representative Jack Kingston, even for schoolkids, who should be required to “sweep the floor of the cafeteria” (as theyactually do at a charter school in Texas).

The callousness of U.S. political and business leaders is disturbing, shocking. Hunger is just one of the problems of our children. Teacher Sonya Romero-Smith told about the two little homeless girls she adopted: “Getting rid of bedbugs, that took us a while. Night terrors, that took a little while. Hoarding food..”

Read More The Numbers Are Staggering — The US Is a ‘World Leader’ in Child Poverty | Alternet.

An observer to the world. I have a unique view of the world and want to share it. It's all in love from the people of the "blues". Love, Knowledge, and Sharing amongst all is the first steps towards solving all the problems amongst humanity.
View all posts by The Soul Brother →
This entry was posted in News from the Soul Brother and tagged Child poverty, children, health, politics, poverty, United States. Bookmark the permalink.