Citizens Stand For Economic Equality With #BlackWorkMatters And The #FightFor15 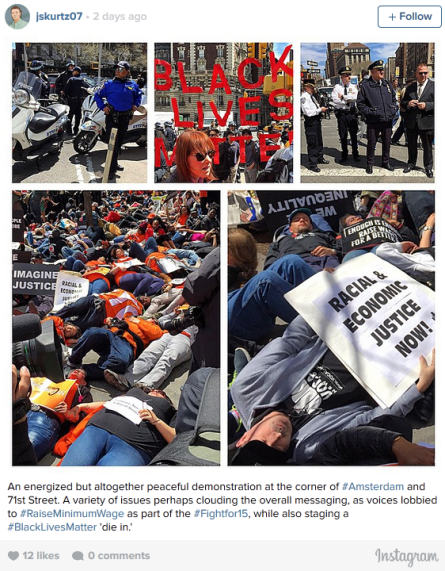 Police brutality is not the only issue concerning black lives in America.

#BlackLivesMatters is a hashtag that has taken the Internet by storm and symbolizes a movement around the validation and protection of black lives around the globe. However, while the campaign includes the fight against many issues plaguing the African American community, one particular civil rights focus took the main stage on Wednesday: #BlackWorkMatters. In a push for racial justice, protesters took to the streets in cities across the country — from New York City, Chicago, Seattle, Sacramento and New Orleans — to demand a $15 per hour minimum wage and the creation of a union for fast food workers.

Black Youth 100, a non-profit organization focused on racial, social and economic freedom, released a video Monday explaining The Black Work Matters campaign — also known as the Fight For $15 — which calls attention to the disproportionate number of young black people who work in low wage jobs and the experiences they have in these positions.

The mission of the campaign, which was also a part of Wednesday’s protests, is to empower low wage workers to negotiate fair terms for their employment. Low pay and unsafe work environments plague jobs for parents and families that work in fast food and other low wage industries, according to BYP100 Chicago Chapter co-chair Janae Bonsu. “It’s inhumane,” she says.

Read More Citizens Stand For Economic Equality With #BlackWorkMatters And The #FightFor15.

An observer to the world. I have a unique view of the world and want to share it. It's all in love from the people of the "blues". Love, Knowledge, and Sharing amongst all is the first steps towards solving all the problems amongst humanity.
View all posts by The Soul Brother →
This entry was posted in News from the Soul Brother. Bookmark the permalink.