A Teen Dies After Police Encounter on NYC Subway 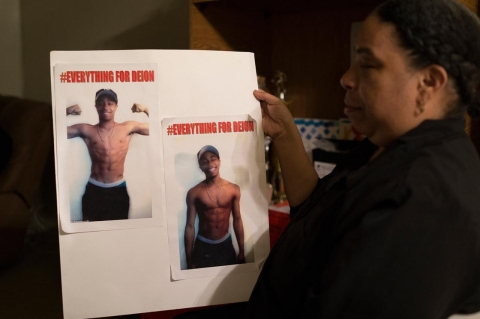 One evening almost two years ago, a young couple walked hand in hand to a subway station in the Brownsville section of Brooklyn. The girl, Hesha Sanchez, 17, wasn’t carrying her fare card, but she wanted to keep her boyfriend, Deion Fludd, company while he waited for the train. So they squeezed through the turnstile on a single swipe of his card.

Roughly 40 minutes later, Fludd, bloodied and semiconscious, was carried from the station. According to the New York City Police Department, officers tried to arrest Fludd for fare evasion after encountering him on the subway platform. He then fled onto the tracks and was hit by a train. But when Fludd awoke the next day, his ankle shackled to his hospital bed, he told a different story: According to his family, the teenager said he’d been injured by police, who’d beaten him after he climbed back onto the subway platform. Nine weeks later, Fludd died from complications from his injuries.

Newly released reports obtained by Al Jazeera America — including one resulting from a New York Police Department’s Internal Affairs Bureau, or IAB, investigation and one from the New York City Transit Authority, or NYCTA — tell a tale of desperation. Police, traveling outside their designated areas of patrol, were committed to making arrests that night in order to avoid additional checkpoint duties. Fludd had already been arrested five times for infractions many teenagers commit without major consequences, including marijuana possession, fare evasion and fighting in school. One more arrest could have sent him to jail — and Fludd happened to be at the wrong place at the wrong time.

The police did not respond to requests for comment on Fludd’s version of events. Before he died, neither the IAB nor the New York Police Department spoke with Fludd, nor have they investigated his claims. What happened that night remains contested by Fludd’s family, who are suing the city and asking the Brooklyn district attorney’s office to investigate.

via A Teen Dies After Police Encounter on NYC Subway | Al Jazeera America.

An observer to the world. I have a unique view of the world and want to share it. It's all in love from the people of the "blues". Love, Knowledge, and Sharing amongst all is the first steps towards solving all the problems amongst humanity.
View all posts by The Soul Brother →
This entry was posted in News from the Soul Brother and tagged Brooklyn, Deion Fludd, New York Police Department, NYPD, race, United States. Bookmark the permalink.