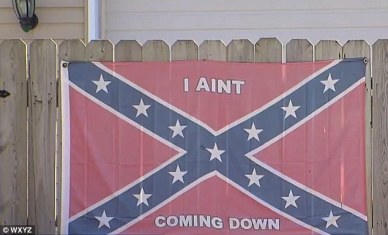 A businessman in suburban Detroit is under fire from unhappy neighbours after hanging a Confederate flag and nooses at his two properties in the area.

Robert Tomanovich, who owns Robert’s Discount Tree Service in Livonia, Michigan, first hung a noose from a tree and a Confederate flag, printed with the slogan ‘I ain’t coming down,’ on a fence at his home.

When neighbours complained, a second noose appeared on a tree outside his tree-cutting business which operates at a second property on the same street.

Tomanovich, 55, has denied his actions are racist, although an employee has admitted that the second noose was a deliberate move to antagonise locals.

‘One hundred fifty years after Abraham Lincoln’s death, we are still going through this kind of atrocities. A hangman’s noose and a Confederate flag?’ neighbor Mary Greer told WXYZ.

Another local complained that at least one of the nooses was hung from a tree small enough for a young child to climb.

When the local TV network attempted to speak to Tomanovich on Friday he refused, although his wife Lindy tried to explain the noose as a tribute to a dead friend.

‘Robert has a friend that died in that way (hanging himself), and that’s in memory of his friend,’ she told WXYZ. ‘There’s no crime in hanging a noose.’

An unnamed employee was quick to take credit for the noose at Tomanovich’s business. ‘Screw ’em… We’re gonna put more up,’ he said.

An observer to the world. I have a unique view of the world and want to share it. It's all in love from the people of the "blues". Love, Knowledge, and Sharing amongst all is the first steps towards solving all the problems amongst humanity.
View all posts by The Soul Brother →
This entry was posted in News from the Soul Brother and tagged Confederate flag, Livonia, Michigan, race, racism, Robert Tomanovich, Robert's Discount Tree Service. Bookmark the permalink.