Baltimore Police Officer Calls For Community And Cops To Come Together, Tells Demonstrators: ‘I’m Here For You’ 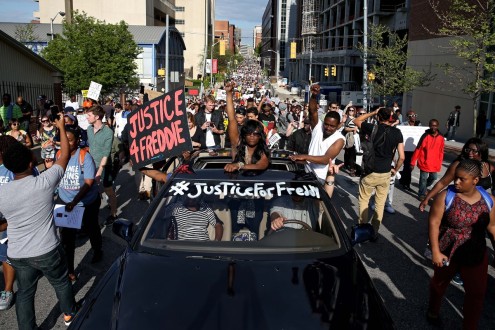 In the days since thousands of protesters in Baltimore, Maryland have declared black lives matter and demanded an end to police brutality, one officer is reminding her community that working together is the only way to move forward.

Sgt. K Glanville spoke to demonstrators Saturday night during a block party that was held on a day where massive crowds participated in a festive rally in the city. Revelers rejoiced following State Prosecutor Marilyn Mosby’s Friday announcement of criminal charges against the six officers involved in the death of 25-year-old Freddie Gray. Gray died on April 19 from a severe spinal cord injury he sustained while in police custody.

Mosby’s statement was unexpected but welcome news for the community, and gave way to an honest dialogue between a cop and the citizens she protects.

“My heart is in this,” Glanville told a small crowd. “I’m not wasting time on someone that’s not trying to let me in, when I got all these other people that got the door wide open, saying ‘Sgt. Glanville, please step in.’ I am here, I’m available. I give kids my phone number, I tell people ‘you need something, you call me.’ It all starts with relationship building.”

Glanville has been with the Baltimore Police Department for 19 years and has never received a complaint, she said. The officer, who has a degree in political science, told protestors that police and citizens need to start treating each other as human beings.

“You have to see past my uniform,” she said. “I’m somebody’s mother, I’m somebody’s daughter, I have parents, I’m human. You have to remember that I don’t just become a robot because I put this uniform on.”

Community members who gathered around Glanville could be seen hugging the officer, and at times tearing up.

Read More  Baltimore Police Officer Calls For Community And Cops To Come Together, Tells Demonstrators: ‘I’m Here For You’.

An observer to the world. I have a unique view of the world and want to share it. It's all in love from the people of the "blues". Love, Knowledge, and Sharing amongst all is the first steps towards solving all the problems amongst humanity.
View all posts by The Soul Brother →
This entry was posted in News from the Soul Brother and tagged #OneBaltimore, Baltimore, Baltimore Police, Block party, Freddie Gray, protests, race, Sgt. K Glanville. Bookmark the permalink.