I’ve served 15 years of my life sentence for a drug crime. Can I go home now? 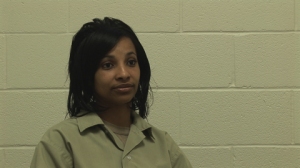 Late last month, US attorney general Eric Holder announced that the Obama administration would release new guidelines for clemency petitions, opening up the possibility that thousands of people serving long prison sentences for non-violent drug offenses might be released. The guidelines require that applicants have served at least 10 years on a charge that would be prosecuted differently today – a standard which mostly applies to drug charges – and that they have a good prison record, a limited prior arrest record and no ties to organized crime. The author of this op-ed has served 14 years and nine months of her sentence and hopes that she might qualify for clemency.

When I was asked to write my bio for this story, I wrote, “Sharanda Jones is a loving, caring mother with a open heart and mind.”

When I was asked to write the story itself, I wrote, “I am a first time non-violent offender serving a life sentence for one count of conspiracy.”

There is no reduction, no good behavior, that will ever reduce my sentence and allow me to return to society. I know that, unless President Obama (or one of his successors) commutes my sentence, I will die in prison. A life sentence in the federal system is just a very slow death.

I was sentenced in 1999 for a crack cocaine charge. I write this not to boast or brag about the bad decisions I made in my past. I write this because I think I deserve a second chance.

I grew up in a very small town – Terrell, Texas – with four other siblings. My mom was paralyzed in an automobile accident when I was little, so I was raised by my grandmother. I had to assist my grandmother with all my mother’s medical needs from a very young age. Life was loving but hard, and we had very little money.

After high school, I started hanging out and, blinded by society and worldly idols, I started trafficking in drugs as an easy way to help my mom pay bills and get the extra things I wanted. I never intentionally or knowingly meant to harm anyone – like a lot of people, I was ignorant of the harm drugs can inflict on users, their families and our communities.

Read More Ive served 15 years of my life sentence for a drug crime. Can I go home now? | Sharanda Jones | Comment is free | The Guardian.

An observer to the world. I have a unique view of the world and want to share it. It's all in love from the people of the "blues". Love, Knowledge, and Sharing amongst all is the first steps towards solving all the problems amongst humanity.
View all posts by The Soul Brother →
This entry was posted in News from the Soul Brother and tagged Barack Obama, clemency, crime, Eric Holder, first time offense, incarceration, law, Life imprisonment, race, Rockefeller laws, Sharanda Jones. Bookmark the permalink.