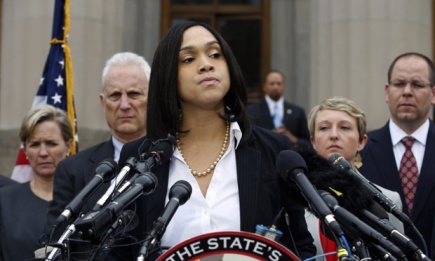 Baltimore’s top prosecutor has filed a blistering response to conflict of interest allegations raised by lawyers for six police officers charged in the death of Freddie Gray.

The defense lawyers have asked that a judge replace state’s attorney Marilyn Mosby with an independent prosecutor. They accused her of charging the officers with baseless crimes to prevent more rioting in the district represented by her husband, a city councillor, and say that she is too close to an attorney for Gray’s family.

Mosby’s response, made available on Tuesday, describes the officers’ motion as bouncing “from one ridiculous allegation to another, like a pinball on a machine far past ‘TILT’”.

“Whether born of desperation, the desire for publicity, or a gross effort to taint the grand jury and potential petit jury pool, the motion is absurd,” wrote Mosby’s chief deputy, Michael Schatzow.

The defense argued that Mosby hastily charged the officers to quash protests that gave way to violence in west Baltimore, where Gray was arrested and where Mosby’s husband, Nick Mosby, is a city councillor. Gray ran from police before his arrest on 12 April and died a week later of a spinal injury he suffered before he arrived at the police station. The unrest began after days of peaceful protests.

Schatzow dismissed this defense claim as “a truly breathtaking non-sequitur”. The “defendants offer nothing beyond speculation” as to why the Mosbys would be any different from any other law-abiding Baltimore resident in seeking “peace and an end to violence”, he wrote.

An observer to the world. I have a unique view of the world and want to share it. It's all in love from the people of the "blues". Love, Knowledge, and Sharing amongst all is the first steps towards solving all the problems amongst humanity.
View all posts by The Soul Brother →
This entry was posted in News from the Soul Brother and tagged Baltimore, Fraternal Order of Police, Freddie Gray, justice, law, Marilyn Mosby, United States. Bookmark the permalink.