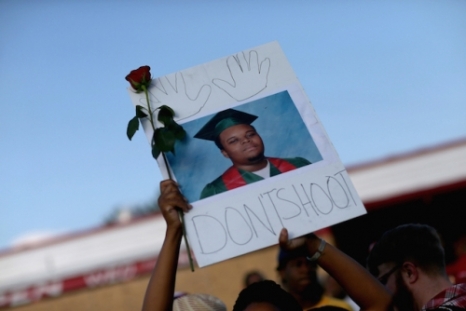 Today Michael Brown Jr, would have turned 19 had he not been killed by Darren Wilson, a white police officer who claimed that the teen looked like a demon while being shot at.

Brown’s killing sparked more national attention and grassroots outcry than one could ever have imagined, and the reverberations of the August 9, 2014 incident continue one year later. Thousands of people have been motivated by Brown’s death to protest, join solidarity groups and proclaim loudly that #BlackLivesMatter.

Resource Generation (RG), a nonprofit group of mostly white young people who self-identify as wealthy and class privileged, decided to raise money—$1 million for what they call black-led organizing for black liberation. “Seeing day after day the headlines and the popular outrage in Ferguson led a small number of us in RG to ask, ‘What can we do?'” recalls Chad Jones, a middle class “advocate member” of black and white parentage.* “The possibility of moving a million dollars in nine months to black organizing for black liberation was something that would be a material contribution and an act of solidarity with black communities most under attack.”

Founded in 1998, Resource Generation isn’t a grantmaking group; it serves as a convener and organizer of donors ages 18 to 35. “Those young donors really craved a space to effectively leverage their privilege,” says executive director Jessie Spector, a 28-year-old queer white woman. “Not just writing a check,” she continues, “But fundraising from wealthy networks [and] affecting systemic and institutional change.” They frame their donor organizing as being in the service of “the equitable distribution of land, wealth and power,”a tagline that is at the top of every page on their website.

I spoke with Jones, Spector and Willa Conway, a white member living in New Orleans, by phone three weeks ago when the group was still a few hundred thousand dollars away from their goal. As of last week, the group had surpassed it by $70,000 with more than 100 donors participating.

An observer to the world. I have a unique view of the world and want to share it. It's all in love from the people of the "blues". Love, Knowledge, and Sharing amongst all is the first steps towards solving all the problems amongst humanity.
View all posts by The Soul Brother →
This entry was posted in News from the Soul Brother and tagged black liberation, Ferguson, Michael Brown, organizing, Resource Generation, youth. Bookmark the permalink.