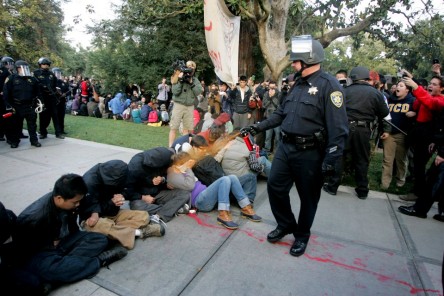 Last week, Gawker interviewed Robin DiAngelo, a professor of multicultural education at Westfield State University. She discussed aspects of her thinking on whiteness, which are set forth at length in her book, What Does it Mean to be White? I’ve ordered the book.

Meanwhile, her remarks on police brutality piqued my interest. Some of what Professor DiAngelo said is grounded in solid empirical evidence: blacks and Hispanics are disproportionately victimized by misbehaving police officers; there are neighborhoods where police help maintain racial and class boundaries. And if our culture, which she calls “the water we swim in,” contained fewer parts racism per million, I suspect that police brutality would be less common.

But a core part of her analysis is very much at odds with conclusions that I’ve drawn after years of writing against police misconduct and pondering how to reduce it.

First, consider her remarks with an open mind.

Interviewer Donovan X. Ramsey asked, “What have been your thoughts on the national conversation happening around police brutality and the role that whiteness plays into it?”

She answered as follows:

We have to change the water officers swim in. We can bring in different tools, even officers of color, but if we don’t change the water that they swim in, that we all swim in. The water is the unexamined whiteness, the everyday whiteness. Unexamined whiteness is right now probably the most hostile for people of color. There are the extreme incidents of violent and explicit racism that we take note of, but the everyday racism is also so toxic.

I think our everyday coded language around “good neighborhoods” and “bad neighborhoods” is what allows for tremendous violence to happen… When you label a neighborhood “bad” and avoid it, then you don’t know and don’t see what goes on there. And there’s no human face to interrupt that narrative. So, we see outrage around figures like Michael Brown because suddenly there’s a face. But, for the most part, we don’t know and we don’t care as long as the police keep “them” from “us,” so our schools can be better and we can feel safe at the top of the hierarchy. I think we use the police to maintain those boundaries.

An observer to the world. I have a unique view of the world and want to share it. It's all in love from the people of the "blues". Love, Knowledge, and Sharing amongst all is the first steps towards solving all the problems amongst humanity.
View all posts by The Soul Brother →
This entry was posted in News from the Soul Brother and tagged Baltimore, Ferguson, police, police abuse, race, racism, social activism. Bookmark the permalink.