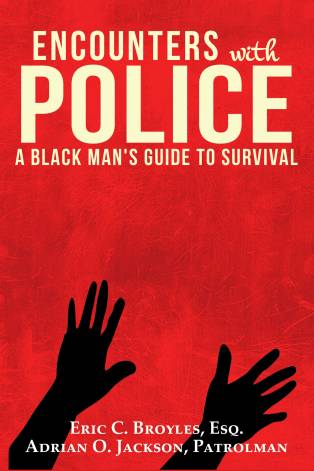 Attorney Eric Broyles has one goal: “I want to keep black men and boys alive.”

“Encounters With Police: A Black Man’s Guide to Survival,” a book written by Broyles and his colleague of 20 years, veteran police patrolman Adrian Jackson, is the result of that goal.

The book, which Broyles says was inspired by “anger,” is dedicated to numerous slain, unarmed black males such as Michael Brown, Oscar Grant, and Sean Bell. Broyles also includes in the dedication an acknowledgement of the “countless” black men and boys who died during encounters with police. He concludes the dedication with Trayvon Martin, the black teen who did not die during a police encounter, but who Broyles believes started a movement.

In his book, Broyles, an African American, discusses the steps he believes black males should take when encountering the police which include:

Step 2: Bad Police Officers can be punished, but not on the spot and not by you.

Step 3: In traffic stops remain calm and polite and be transparent.

Step 4: When detained or questioned by police remember practical steps 2 and 3.

Step 5: Be careful when holding a weapon of any type.

Step 6: Remember our history and ability to overcome challenges based on race.

An observer to the world. I have a unique view of the world and want to share it. It's all in love from the people of the "blues". Love, Knowledge, and Sharing amongst all is the first steps towards solving all the problems amongst humanity.
View all posts by The Soul Brother →
This entry was posted in News from the Soul Brother and tagged Adrian O. Jackson, black men, Black Women, book, dealing with police, Eric C. Broyles, literature, police stops. Bookmark the permalink.

1 Response to Dealing With Cops: The Latest How-To Book