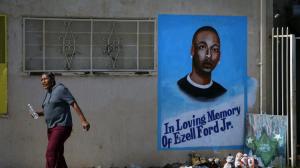 A day before the Police Commission is scheduled to decide whether two LAPD officers acted within policy in the fatal shooting of Ezell Ford, Mayor Eric Garcetti said he was confident that commissioners would “conduct an impartial and fair-minded review.”

Garcetti’s statement came as about a dozen protesters continued to camp outside Getty House, the official mayoral residence in Windsor Square, demanding he take action over Ford’s death. The mayor also said he called Ford’s mother, Tritobia, on Sunday night and hoped to meet with her in the coming days.

“I didn’t reach her but left a message, telling her my heart goes out to her and her grieving family, as it has since the news first broke last August,” Garcetti said.

Tritobia Ford did not immediately respond to a request for comment Monday morning. But one of the activists gathered outside Getty House said the mayor’s call was “a day late and a dollar short.”

“That doesn’t absolve him of responsibility. He is the mayor of Los Angeles. That means he has the capacity to meet our demands and really be held responsible for the police force,” said Melina Abdullah, a professor and chair of Pan-African studies at Cal State Los Angeles. “And if he won’t do that, we will hold him accountable in 2016.”

Protesters descended upon Garcetti’s house early Sunday morning, holding pictures of Ford above their heads as they outlined their demands. The demonstrators, part of the Black Lives Matter movement, called on Garcetti to fire LAPD Chief Charlie Beck and for the Police Commission to conduct its review of Ford’s shooting in a public forum.

An observer to the world. I have a unique view of the world and want to share it. It's all in love from the people of the "blues". Love, Knowledge, and Sharing amongst all is the first steps towards solving all the problems amongst humanity.
View all posts by The Soul Brother →
This entry was posted in News from the Soul Brother and tagged Black Lives Matter, Eric Garcetti, Ezell Ford, LAPD, Los Angeles, police abuse. Bookmark the permalink.