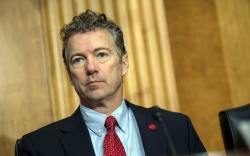 Kentucky Sen. Rand Paul, a 2016 Republican presidential candidate, referred to the suicide of 22-year-old Kalief Browder as a tragic example as he spoke of justice applied unequally to black and white Americans Tuesday night.

Browder was arrested in 2010, when he was 16, for stealing a backpack—a crime he insisted he did not commit. He was in jail on Rikers Island in New York City for three years, without a conviction. His plight, including brutal beatings by jail guards and other prisoners as well as years in solitary confinement, was chronicled in a 2014 New Yorker story and became a symbol for a broken criminal justice system — one that Paul has invoked frequently on the campaign trail.

“I’ve been telling this story for about a year and a half, two years, and it makes me sad now. I thought about not talking about it or doing the story but I thought that this young man’s memory should help us to try and change things. He died this weekend, he committed suicide,” Paul said. “Even if you’re convicted of a crime, in America for goodness sake, are we going to let people be raped and murdered and pillaged in a prison because they’re convicted? And he wasn’t even convicted.”

The remarks, among the most somber and reflective the Kentucky senator has made on criminal justice, came at a fundraiser dinner for Baltimore County Republicans, only miles away from where protests broke out in the aftermath of the death of another African-American man in police custody.

An observer to the world. I have a unique view of the world and want to share it. It's all in love from the people of the "blues". Love, Knowledge, and Sharing amongst all is the first steps towards solving all the problems amongst humanity.
View all posts by The Soul Brother →
This entry was posted in News from the Soul Brother and tagged 2016 Elections, politics, race, Rand Paul, United States. Bookmark the permalink.