White fragility is real: 4 questions white people should ask themselves during discussions about race 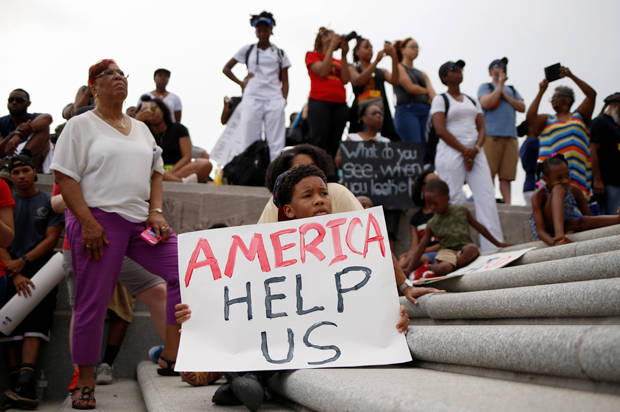 Since the shooting deaths of Alton Sterling and Philando Castile at the hands of law enforcement officers earlier this month, millions have taken to the streets as well as social media to express their outrage. Tags like #BlackLivesMatter and #EndWhiteSilence have been trending consistently on Twitter and Facebook, and CBS News footage of Alton Sterling’s death on YouTube has garnered over 1.7 million views.

Earlier today, a fourth Baltimore police officer indicted in the 2015 death and arrest of Freddie Gray, an event that sparked a series of protests known as the Baltimore Uprising, was acquitted of all charges, including manslaughter and reckless endangerment. The conversation — and the outrage — is now louder than ever.

On Facebook, I’m fortunate to be friends with scores of people, white and black, who are outraged at these deaths and others like them, and who are willing to shout down overt racism when they see it. But when difficult conversations about race arise, there also emerges a coping mechanism that all white people are privy to, one that is equally damaging as blatant racism and one that not all of us realize we’re employing: white fragility.

White fragility is a phrase coined by author Dr. Robin DiAngelo, and is defined as “a state in which even a minimum amount of racial stress becomes intolerable, triggering a range of defensive moves.” According to DiAngelo, most white people “live in a social environment that insulates them from race-based stress,” due to their privilege as part of the cultural majority. In turn, says DiAngelo, whites are infrequently challenged and have less of a tolerance to race-based stress, causing them to be hostile, guilty, defensive, or fearful when confronted. This phenomenon is white fragility. In the end, white fragility ensures that conversations about race are derailed, and the status quo of white supremacy is upheld.

I consider myself an ally, but I frequently need to check myself against white fragility, in order to make sure I help center the conversation where it’s appropriate – black deaths at the hands of law enforcement – and not on feelings of white guilt, anger or denial (mine or anyone else’s).Here are a few ways I check myself against white fragility.

Here are a few ways I check myself against white fragility.

1. Am I trying to change the subject?

An observer to the world. I have a unique view of the world and want to share it. It's all in love from the people of the "blues". Love, Knowledge, and Sharing amongst all is the first steps towards solving all the problems amongst humanity.
View all posts by The Soul Brother →
This entry was posted in News from the Soul Brother and tagged Black Lives Matter, race, racism, United States. Bookmark the permalink.

1 Response to White fragility is real: 4 questions white people should ask themselves during discussions about race