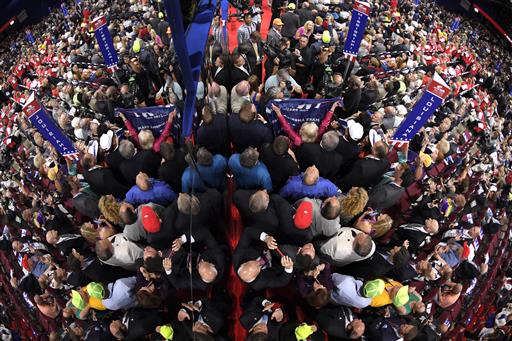 After Mitt Romney lost the 2012 presidential election, Republican Party heavyweights uniformly agreed that White voters alone do not hold the keys to winning the White House.

Yet in 2016, another overwhelmingly White gathering of Republican convention delegates — the makeup clear on television images or a walk through the Quicken Loans Arena floor — has nominated an all-White male ticket: businessman Donald Trump and Indiana Gov. Mike Pence.

Trump leaned almost exclusively on white voters to win the nomination and, in the process, alienated swaths of minorities with his push for a border wall to stop illegal immigration, calls for a “deportation force” and proposals to ban non-citizen Muslims from entering the country.

“He offended so many people,” said Texas GOP delegate Adryana Boyne, who is Latina. “I think he needs to apologize and he hasn’t.”

At the ballot box, simple math is at play as the country becomes less White with each presidential cycle. The more Trump struggles with non-Whites, the more pressure there is for him to reach levels of white support no candidate has managed since Ronald Reagan’s 1984 landslide.

Pence may shore up support among white conservatives, particularly evangelical Christians wary of Trump, but Trump’s running mate may not easily connect with non-white voters, and many of the elected Republicans who could play that role aren’t Trump allies.

An observer to the world. I have a unique view of the world and want to share it. It's all in love from the people of the "blues". Love, Knowledge, and Sharing amongst all is the first steps towards solving all the problems amongst humanity.
View all posts by The Soul Brother →
This entry was posted in News from the Soul Brother and tagged Cleveland, Donald Trump, Mike Pence, Presidential campaign, Quicken Loans Arena, race, Republican Convention, Republican Party. Bookmark the permalink.