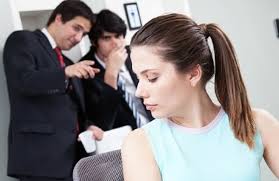 Jhana, an online resource with articles and tools for managers used by employees at Google, Groupon, Eventbrite, Modcloth, and Ask.com, published an article called “What if a male colleague gets the wrong idea?” to help women deal with unwanted sexual advances in the workplace. Unfortunately, as Jezebel’s Erin Gloria Ryan found, the manual doesn’t offer helpful advice for how to tell men to back off or even report inappropriate behavior, but instead tells women how they can modify their clothes and behavior to avoid it, placing the blame and the solution for the problem with them.

While the article may have been taken down (and is behind a paywall), Ryan took screenshots of the various tips that it gives to working women. Some of the problematic advice (emphasis added):

Read More Manager Training Guide Blames Women For Coworkers Who Come On To Them | ThinkProgress.

An observer to the world. I have a unique view of the world and want to share it. It's all in love from the people of the "blues". Love, Knowledge, and Sharing amongst all is the first steps towards solving all the problems amongst humanity.
View all posts by The Soul Brother →
This entry was posted in News from the Soul Brother and tagged business, Eventbrite, Google, Groupon, harassment, Jezebel, Sexual harassment, women, workplace. Bookmark the permalink.