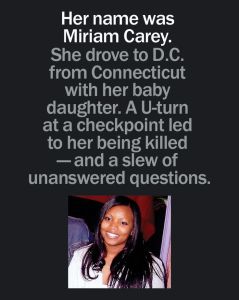 At 2:13 p.m. on October 3, 2013—10 months before Michael Brown was killed in Ferguson, Missouri, nine months before Eric Garner was choked in Staten Island—a 34-year-old African American woman drove into a checkpoint in Washington, DC. Her car, a Nissan Infiniti, had Connecticut license plates; her one-year-old daughter sat in the back. Maybe the driver knew this checkpoint leads to the White House. Or maybe not. She did soon appear to realize, however, that she was somewhere that she did not belong: Secret Service officers began hollering at her—”Whoa! Whoa!”—and she turned her car around. When she attempted to drive out of the checkpoint area, an off-duty Secret Service officer placed a section of metal fencing in front of her, even as he held on to what appeared to be a cooler and a plastic bag. She pressed on the gas, knocking the officer and barricade to the ground, and zoomed down Pennsylvania Avenue.

There was less traffic than usual this afternoon; the federal government had shut down after Congress had failed to approve a budget on time. Despite the relative quiet, a sense of unease pervaded the capital: 17 days earlier, a former Navy reservist had killed 12 people at the Washington Navy Yard. Maybe the lingering memory of this mass murder helps explain what happened next. Maybe not. Either way, the driver was now “weaving through traffic and ignoring red lights,” according to a later government account, with Secret Service in hot pursuit. Soon she arrived on the west side of the US Capitol, where she drove the wrong way around Garfield Circle “almost hitting another vehicle head-on.”

She stopped next to a curb, and six officers on foot surrounded her Infiniti. Guns drawn, they yanked on the doors, demanding she step out. Instead, she put the car in reverse, slammed into a police cruiser behind her, then lurched forward onto a sidewalk, forcing officers to scatter. Three officers—two from the Secret Service, one from the Capitol Police—fired eight rounds at her. But she kept going, careening down First Street NW, turning right on Constitution Avenue, police cruisers tailing her, lights spinning and sirens screaming.

Read More How a Confused Mom Drove Through a White House Checkpoint and Ended Up Dead | Mother Jones.

An observer to the world. I have a unique view of the world and want to share it. It's all in love from the people of the "blues". Love, Knowledge, and Sharing amongst all is the first steps towards solving all the problems amongst humanity.
View all posts by The Soul Brother →
This entry was posted in News from the Soul Brother and tagged Miriam Carey, Miriam Carey shooting, United States, US Secret Service, Washington D.C., White House Security. Bookmark the permalink.