A Ground-Level View of Baltimore’s Protests: Hope, Anger, and Beauty 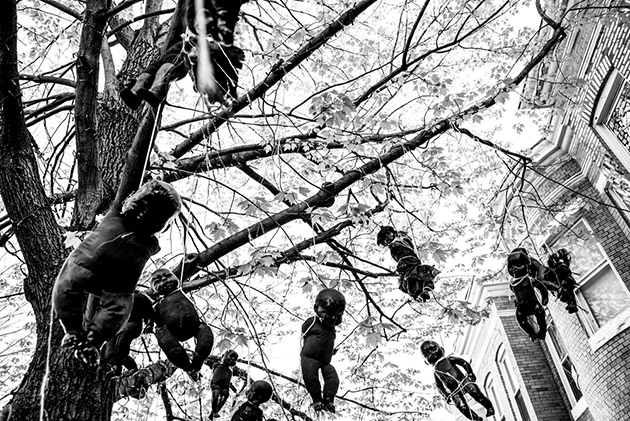 Black baby dolls hung from a tree as a symbol of protest of the death of 25 year old Freddie Gray in Baltimore, MD on April 28, 2015. (Photo/Andrew Renneisen)

On April 12, Freddie Gray was arrested by Baltimore police. One hour later he was comatose. A week later he was dead, succumbing to spinal injuries inflicted while in custody. On Monday, Gray’s funeral was followed by peaceful protests as well as looting, arson, and confrontations with police.

Photographer Andrew Renneisen was on the streets that night and the following day as the city took stock of the riots’ aftermath, capturing images of violence and destruction, but also hope and courage.

An observer to the world. I have a unique view of the world and want to share it. It's all in love from the people of the "blues". Love, Knowledge, and Sharing amongst all is the first steps towards solving all the problems amongst humanity.
View all posts by The Soul Brother →
This entry was posted in News from the Soul Brother and tagged #OneBaltimore, Baltimore, Freddie Gray, Freddie Gray murder, photo essay, protest, United States. Bookmark the permalink.