De Blasio: Civil Disobedience Means Do What The Cops Tell You 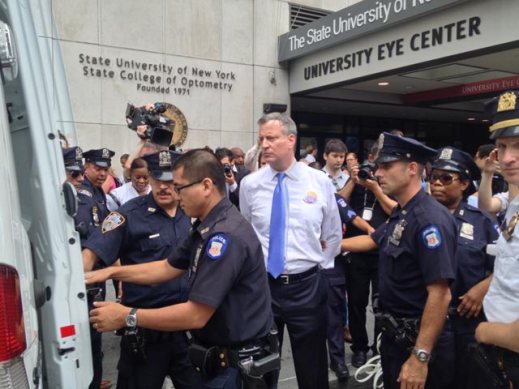 After police refused to let thousands of peaceful Black Lives Matter protesters march in the street on Wednesday, some people noted that the NYPD’s tactic of violently repelling and arresting demonstrators differed considerably from how the de Blasio administration handled similar protests just a few months ago. At a press conference yesterday, the mayor assured reporters that this was wrong: “If you guys want to sensationalize, if you think that’s your contribution to society, feel free.”

“I’m giving you lots of quotes, maybe you could borrow from some of these quotes,” the mayor said, helpfully, as he set the record straight.

“We have an extraordinary tradition of freedom of thought, a respect for diversity of all kinds, and a deep, deep respect for the right to peacefully protest. It’s something that I believe that the NYPD has handled, over many, many years, with exceptional distinction.”

Overwhelmed by rich memories of the NYPD’s harmonious handling of dissent, the mayor seemed to have forgotten all the rebukes the department has earned from federal courts for unlawfully spying on innocent people, the wrongful arrests of nearly 2,000 political demonstrators (and subsequent $18 million settlement), and the wanton acts of cruelty committed against some people riding bicycles.

The mayor continued: “The NYPD coordinates with any protesters who want to have an honest conversation about how to make their protests work right. There’s is a long tradition of this. Ask people the stories of Occupy Wall Street, of the ongoing dialogue that occurred between police and the protesters, day in and day out.”

An observer to the world. I have a unique view of the world and want to share it. It's all in love from the people of the "blues". Love, Knowledge, and Sharing amongst all is the first steps towards solving all the problems amongst humanity.
View all posts by The Soul Brother →
This entry was posted in News from the Soul Brother and tagged #OneBaltimore, activism, Black Lives Matter, Ferguson, police abuse, politics, race, social activism. Bookmark the permalink.