‘Our Demand Is Simple: Stop Killing Us.’ 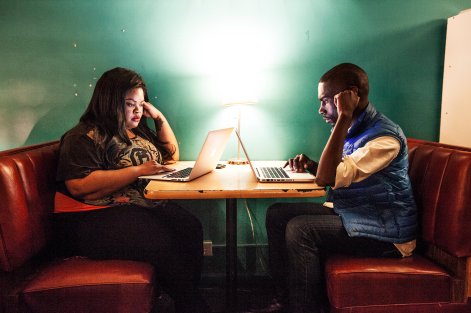 On the evening of April 25 at the corner of Pratt and Light Streets, in Baltimore’s revitalized downtown district, more than 100 police officers in riot gear stood shoulder to shoulder, shields up. Six officers on horseback fidgeted behind them, staring down at a crowd of about 40, an odd mixture of protesters, journalists and protester-journalists. Earlier in the afternoon, well over a thousand people marched from the Western District police station to City Hall to protest the death of Freddie Gray, a 25-year-old black man whose spinal cord was severely injured while he was in the custody of the Baltimore Police Department. Only a handful of live-streamers, an older man in a kente-cloth kufi, five or six teenagers with bandannas drawn across their face and two young women in cocktail attire who had just been kicked out of a wedding were left. Each person was filming the police.

In the coming days, riots would convulse the city, with young people running through the streets, looting stores and setting fires, and the National Guard descending on their neighborhoods. But this protest looked much like the ones that have characterized the growing movement against police violence. Bodies moved in the dark, but the faces — protesters and police officers alike — were lit up by the thin, lunar glow of cellphone screens.

One of the protesters was DeRay Mckesson, a 29-year-old former school administrator who has spent much of the past nine months attending and catalyzing such protests, from Ferguson, Mo., last summer and fall, to New York City and Milwaukee in December, to North Charleston, S.C., in April. Mckesson, who is from Baltimore, had returned to his hometown not long after Gray’s death to join the protests. Now he stood in his usual pose — his slender back straight as a ramrod, phone held in front of angular face, camera lens pointed directly ahead.

The phalanx of police officers began tapping their riot shields with their batons and shouting, “Move back!” Then, in a sloppy, seemingly unrehearsed lock step, they advanced on the protesters.

Read More  ‘Our Demand Is Simple: Stop Killing Us.’ – NYTimes.com.

An observer to the world. I have a unique view of the world and want to share it. It's all in love from the people of the "blues". Love, Knowledge, and Sharing amongst all is the first steps towards solving all the problems amongst humanity.
View all posts by The Soul Brother →
This entry was posted in News from the Soul Brother and tagged #OneBaltimore, facebook, Ferguson, Freddie Gray, internet, Michael Brown, protests, St. Louis County, technology, twitter. Bookmark the permalink.