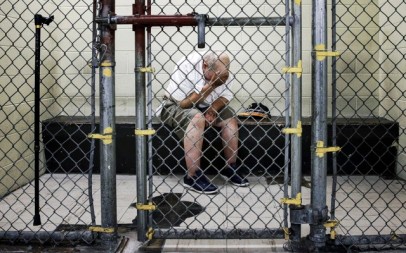 It was 9 o’clock in the morning at Cook County Jail, but in the subterranean holding cells where dozens await their turn before a judge, you wouldn’t be able to tell. Pre-bail processing here takes place entirely underground. A labyrinth of tunnels connects the jail’s buildings to one another and to the Cook County Criminal Court. Signs and directions are intentionally left off the smooth concrete corridors to hinder escape attempts. Even those who run the jail get lost down here from time to time, they told me.

No natural light reaches the tunnels. Human voices echoed off the featureless walls, creating an omnipresent din. On this Monday, when those arrested over the weekend in Chicago and its suburbs filled the fenced cages, that din became a roar. Many inmates were standing, sitting, or milling around. But some—perhaps two or three per holding pen—were lying on the floor, asleep.

If you can sleep through this, you’re fighting far greater demons than the commotion outside. And the doctors here want to know what they are.

At Cook County Jail, an estimated one in three inmates has some form of mental illness. At least 400,000 inmates currently behind bars in the United States suffer from some type of mental illness—a population larger than the cities of Cleveland, New Orleans, or St. Louis—according to the National Alliance on Mental Illness. NAMI estimates that between 25 and 40 percent of all mentally ill Americans will be jailed or incarcerated at some point in their lives.

“This is typically what I see everyday,” said Elli Petacque-Montgomery, a psychologist and the deputy director of mental health policy for the sheriff’s department. She showed me a medical intake form filled with blue pen scribbles. Small boxes listed possible illnesses: manic depression, bipolar disorder, ADHD, schizophrenia, and so on. The forms are designed to help jail officials identify which inmates have mental illnesses as early as possible. Details from four new inmates could fit on a single sheet. She showed me a completed one. “Of those four,” she said, pointing to the descriptors, “I have three mentally ill people.”

An observer to the world. I have a unique view of the world and want to share it. It's all in love from the people of the "blues". Love, Knowledge, and Sharing amongst all is the first steps towards solving all the problems amongst humanity.
View all posts by The Soul Brother →
This entry was posted in News from the Soul Brother and tagged Cook County Jail, Illinois, mass incarceration, Mental health. Bookmark the permalink.