Income Inequality Is At The Highest Level In American History

Last year was a good one for everyone’s income. But it was a much better year for the richest of the rich.According to a new analysis by economist Emmanuel Saez, Americans in the bottom 99 percent of the country’s income distribution saw their take home pay rise 3.9 percent in 2015 over 2014’s levels, adjusted for inflation, the best increase they’ve seen in 17 years. But the top 1 percent of the country far outpaced them: the wealthy’s income grew by 7.7 percent last year, reaching a new high. 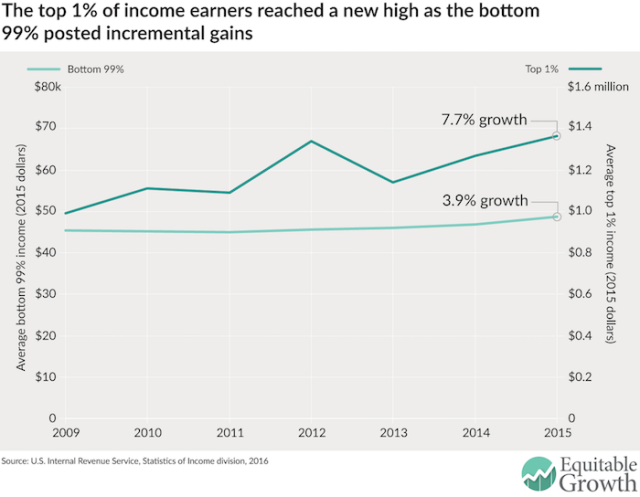 While the past two years have been good for the majority of Americans’ income growth, they still haven’t fully recovered from the recession. For the bottom 99 percent, incomes fell 11.6 percent during the height of the recession from 2007 to 2009. Afterward, they grew just 7.6 percent between 2009 and 2015 — not enough to make up for the downturn. Incomes for the 99 percent have only recovered about 60 percent of what they lost.

Read More: Income Inequality Is At The Highest Level In American History | ThinkProgress

An observer to the world. I have a unique view of the world and want to share it. It's all in love from the people of the "blues". Love, Knowledge, and Sharing amongst all is the first steps towards solving all the problems amongst humanity.
View all posts by The Soul Brother →
This entry was posted in News from the Soul Brother and tagged economy, income inequality, money, United States. Bookmark the permalink.

Leave a Reply to The Smiling Pilgrim Cancel reply