Voting Rights, by the Numbers

By The Editorial Board of the NY Times 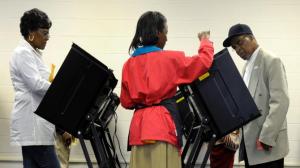 When the Supreme Court struck down the heart of the Voting Rights Act in 2013, its main argument was that the law was outdated.

Discrimination against minority voters may have been pervasive in the 1960s when the law was passed, Chief Justice John Roberts Jr. wrote, but “nearly 50 years later, things have changed dramatically.” In this simplistic account, the law was still punishing states and local governments for sins they supposedly stopped committing years ago.

The chief justice’s destructive cure for this was to throw out the formula Congress devised in 1965 that required all or parts of 16 states with long histories of overt racial discrimination in voting, most in the South, to get approval from the federal government for any proposed change to their voting laws. This process, known as preclearance, stopped hundreds of discriminatory new laws from taking effect, and deterred lawmakers from introducing countless more.

But Chief Justice Roberts, writing for a 5-4 majority, invalidated the formula because “today’s statistics tell an entirely different story.”

Well, do they? A comprehensive new study by a historian of the Voting Rights Act provides a fresh trove of empirical evidence to refute that assertion. The study by J. Morgan Kousser, a professor of history and social science at the California Institute of Technology, examines more than 4,100 voting-rights cases, Justice Department inquiries, settlements and changes to laws in response to the threat of lawsuits around the country where the final result favored minority voters.

An observer to the world. I have a unique view of the world and want to share it. It's all in love from the people of the "blues". Love, Knowledge, and Sharing amongst all is the first steps towards solving all the problems amongst humanity.
View all posts by The Soul Brother →
This entry was posted in News from the Soul Brother and tagged elections, minority voters, Supreme Court, United States, voting, Voting Rights Act. Bookmark the permalink.